Hello! It’s time once again for a run down of my drinks of the last week. I was in a weird place mentally and just wanted to stay curled up in bed as much as I could. I pretty much only drank after work and split most drinks with someone else.

My first drink of the week was a taste of Avery Brewing Company Raja Double IPA. One of the regulars at the bar was drinking it and offered me a taste.

Overall: This beer is super dangerous. It’s 8% and so easy to drink. I’d try a whole can to myself.

My next beer was Peak Organic Summer Session Ale and was shared between a few of us at work. It was dropped off as a sample from one of the beer distributors.

Overall: Not something I’m going to go out and buy, but I”d drink it if it was there.

I made a mistake on an order earlier in the night, and the bar already opened a Corona Extra before I could tell them I put in the wrong beer. Lucky after-shift me. I don’t love Corona, but it really is my favourite basic beer. This is what I drink at dive bars for the most part. 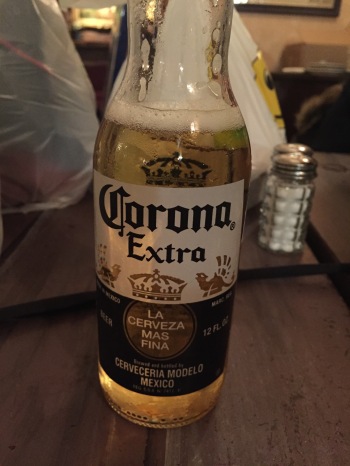 Greg, who works in the kitchen, was kind enough to donate a Sierra Nevada Otra Vez for Jason and I to try. I’m a fan of sour beers and was super excited to drink this when I heard it was being released.

Overall: Compared to other gose-style beers, I feel like this beer is missing the saltiness that I love from the style. I really need to eat a prickly pear one of these days so that I can better describe the prickly-pearness of beers boasting to use the ingredient. I was happy with this beer.

For some bizarre reason, Jason decided to mix Lagunitas IPA and pineapple juice. I assume that he was attempting to see if another IPA with pineapple was as amazing as Ballast Point Grapefruit Sculpin.

Taste: straight up pineapple, the juice overpowers the beer so much

Overall: I really expected this to be so much worse than it was. I feel like you smell the beer and taste the juice. Nothing really spectacular about this. 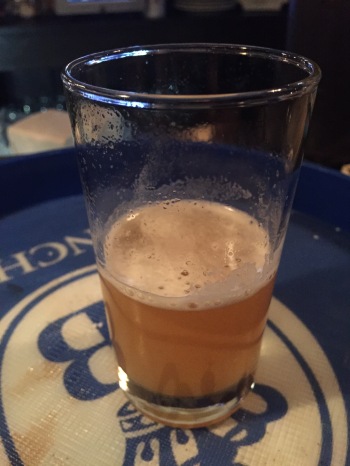 I’ve been looking at Greenport Harbor Pith n’ Peel sitting in the seasonal fridge for a few weeks now and finally decided to try it. I really like Greenport Harbor’s packaging. It’s so simplistic and always seems to pop out at me.

Taste: grapefruit pith AND peel (I see what you did there GH), bitter, hops

Overall: So I’m an idiot and didn’t read the bottle and didn’t realize this was an IPA when I took my first sip. After the initial taste, I liked it more. It’s not a fantastic IPA, but it’s not bad.

The sales rep dropped off SO many Bronx Brewery beers. This time we tried the American Pale Ale.

Overall: I really like this beer. I think it’s a good example of the style. The flavours really meld well and balance each other out. I would recommend this beer to people just getting into IPAs or who are looking for something slightly more flavourful than a session.

When I want to drink, but I’m not feeling very well I tend to fall back on my lovely grapefruit shandys. I love Harpoon UFO Big Squeeze Shandy and drink it constantly. It’s very similar to Schofferhofer Grapefruit, but clocks in at a higher ABV, (4.5% to 2.5% respectively).

Overall: I adore this beer. It’s such a perfect hot weather beer and wonderful to drink year round. I want to play with it a bit this summer and see if I can come up with some fun beer based cocktails. 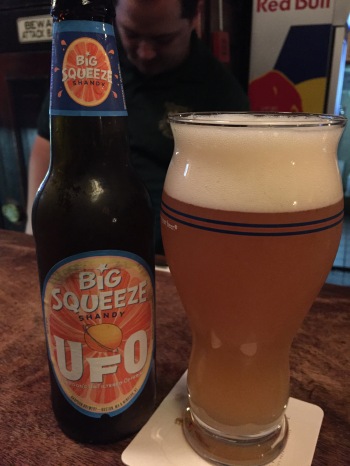 I met my family at my little sister’s soccer game. I haven’t watched her team play since last year, and it’s amazing how much more focused, (for kindergartners), they were since last fall. For lunch/dinner, we ended up at Outback Steakhouse, of all places. The wait was long and the meal even longer. I felt so bad for the hosts because so many people were nasty or not understanding of the fact that they weren’t able to be seated immediately.

When we finally got a table, my mom decided on a margarita, my step-dad got a beer and I settled on a Tito’s Cucumber Lemonade. I wasn’t expecting anything amazing since we were at a chain restaurant. I enjoyed it because who wouldn’t enjoy a super refreshing mix of cucumber, vodka, and lemonade? I’d love to replicate this drink myself at home and add more booze to it due to limitations on chain restaurant cocktail recipes.

Apparently, Greg has decided that Mondays he, Joe, and I are going to take turns bringing in beers to share. This week Greg brought in three beers, all of which I’ve had.

The first beer of the night was Redd’s Blueberry Ale

Taste: follows aroma, a nice balance of bitter and sweet

Overall: The first time I tried this beer was at the Atlantic City Beer and Music Festival 2016. I loved it then and I love it still. This is such a refreshing beer and a great product for people who don’t drink beer. It’s so blueberry! 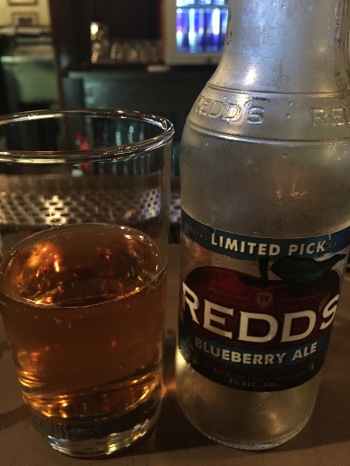 Next was Sierra Nevada Otra Vez. Since I reviewed it above, I’m not going to again. I really like this beer, but I really do wish it was slightly saltier.

Last beer of the night was DuClaw Sweet Baby Jesus! I think I had this beer at the first AC Beer Fest I went to in 2014 and again at last year’s beer fest at Sands Casino.

Overall: This is such a weird beer. I don’t really like it, but it’s not bad. I feel like I want to mix it with Founders Rubaeus or a Framboise.

Jason, being the terrible person that he is, decided to have the last Henry’s Hard Orange Soda while making dinner. This can of Best Damn Root Beer has been sitting in the fridge for a couple weeks and I finally decided to crack it open. It’s Anheuser-Busch’s root beer beer offering.

Overall: Really does not live up to it’s name. Of the four root beer beers I’ve had, I’d rank this 3rd. I was really hoping for something better.

Since it’s my turn to bring beer in on Monday, does anyone have any beer or style suggestions? I have so much beer in my house I could choose from.